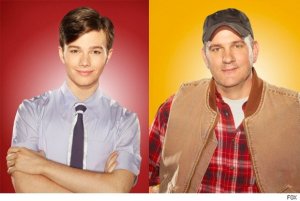 Two things on TV made me openly weep in the last two days.

This morning, I saw a commercial for Dreft. Unless you have a baby, most likely you don’t know what that is, so I’ll tell you. Someone figured out how to market a laundry detergent specifically for baby clothes, and it’s like 10 times more expensive than any other detergent. But I used it religiously for months, because IT’S RECOMMENDED BY PEDIATRICIANS. So the commercial. It said:

“You have a child forever, but you only have a baby for one year.”

I only have 13 days left of that year. So I lost it.  But ultimately, Dreft should be crying, because Posey switched to All Free & Clear half a babyhood ago.

And then there’s Glee.

I’m behind, so I just watched the season premiere yesterday.  If you watch the show, you may share my sentiment that the best character by far is Kurt’s Dad. Kurt’s Dad is the Midwestern, Salt o’ the Earth, Car Shop-Owning Guys’ Guy who happens to be the single father of a gay son. And he couldn’t be prouder. In the episode, he encourages Kurt to follow his dreams to New York City, where he’s sure to find more people like him– people not afraid to be different. Kurt’s scared, but his dad reassures him that At the airport, Kurt tells his father, “I’ll miss you, Dad.” His father responds, “You can always come home.” Kurt exits car. Kurt’s dad says to himself…

Ohmygod. I just started crying again TYPING it. I watched this while Posey stood beaming at me from her “play yard” (read: brightly colored cage). For now, I literally have her locked up under my watch. And yes, she falls over and bumps her head a lot on my watch. But she’s all mine, and we’re together every single day. And I know it won’t be like this forever, because while you have a child forever, you only have a baby for One Year.