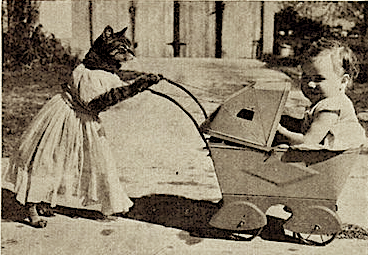 There have been many times in the last 8 months when it’s been suggested to me that I join a Mom’s Group.  I feel like whenever I spend time with another woman who also has a kid, well, that makes us two moms, which essentially qualifies us as a Mom’s Group, so I don’t need to join one.  While I do think that becoming a parent instantly allows you to have an opinion on whether or not to use dryer sheets, I do not think that just because someone else is a mom that we will be best friends forever.

But I also think the opposite of that.

I live on a historic boulevard lined with gorgeous graystones, trees, flowers, and a well-manicured green parkway running right down the middle.  When I take Posey for walks, I’m just one guppy pushing a minnow along– in a sea of BOBs, Bugaboos and Phil & Ted’si.   We’re all just hamster-wheeling around the same one-mile loop.  It sort of makes me sad that there are these dozens of women, all alone, lost in their own baby’s routine, walking lap after lap in a circle, when we could be connecting.  Then I remember my mantra and tell myself I’d probably have nothing in common with any of them, anyway.

And then I saw her.

She had a Snap ‘n Go.  The baby was probably pretty little, because the telltale gauzy swaddle blankets were elaborately draped over the car seat– the way only a brand new mom does.  But I wasn’t looking at the baby. I was looking in the underneath compartment.  There, just hanging out, was a little pooch.  Happy as a clam.  And I knew the woman who had a pet riding in the under-sidecar was someone I wanted to know better.   She had headphones on and only took them out for a second to politely acknowledge my squeal of delight.  You see, my beloved cat, Phillip, loves sitting underneath in the same spot, but as he’s an indoor fellow, I’ve never taken him outside.  He’s not allowed. In my head, I’ve developed some very elaborate netting plans that would enclose the enclave, so we could family-stroll, but it hasn’t happened yet.

Since this first sighting, I haven’t seen the mom/baby/pooch caravan again. But I think of them every day.  And I also think about this:

WHY DON’T THEY MAKE A BABY/PET COMBO STROLLER?

I think it’s the one material object that could make my life complete.