Stole this link off a friend’s Facebook page today… Mom, call me after you see this so we can talk about them one by one.  Click here for maximum cute overload.

There have been many times in the last 8 months when it’s been suggested to me that I join a Mom’s Group.  I feel like whenever I spend time with another woman who also has a kid, well, that makes us two moms, which essentially qualifies us as a Mom’s Group, so I don’t need to join one.  While I do think that becoming a parent instantly allows you to have an opinion on whether or not to use dryer sheets, I do not think that just because someone else is a mom that we will be best friends forever.

But I also think the opposite of that.

I live on a historic boulevard lined with gorgeous graystones, trees, flowers, and a well-manicured green parkway running right down the middle.  When I take Posey for walks, I’m just one guppy pushing a minnow along– in a sea of BOBs, Bugaboos and Phil & Ted’si.   We’re all just hamster-wheeling around the same one-mile loop.  It sort of makes me sad that there are these dozens of women, all alone, lost in their own baby’s routine, walking lap after lap in a circle, when we could be connecting.  Then I remember my mantra and tell myself I’d probably have nothing in common with any of them, anyway.

And then I saw her.

She had a Snap ‘n Go.  The baby was probably pretty little, because the telltale gauzy swaddle blankets were elaborately draped over the car seat– the way only a brand new mom does.  But I wasn’t looking at the baby. I was looking in the underneath compartment.  There, just hanging out, was a little pooch.  Happy as a clam.  And I knew the woman who had a pet riding in the under-sidecar was someone I wanted to know better.   She had headphones on and only took them out for a second to politely acknowledge my squeal of delight.  You see, my beloved cat, Phillip, loves sitting underneath in the same spot, but as he’s an indoor fellow, I’ve never taken him outside.  He’s not allowed. In my head, I’ve developed some very elaborate netting plans that would enclose the enclave, so we could family-stroll, but it hasn’t happened yet.

Since this first sighting, I haven’t seen the mom/baby/pooch caravan again. But I think of them every day.  And I also think about this:

WHY DON’T THEY MAKE A BABY/PET COMBO STROLLER?

I think it’s the one material object that could make my life complete.

I just realized that yesterday was National Pet Day, and I forgot to get you a present! Instead, let me tell you story… 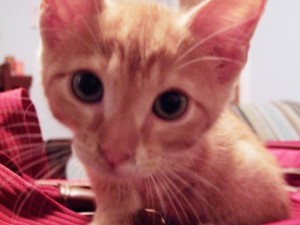 Five years ago, Beef and I brought home our first baby, Phillip from Kay’s Animal Shelter. Actually, I brought him home in a cardboard box with holes poked in the side after he’d a had a seizure-like episode on the counter while I was paying my 60 bucks ($40 I had in my wallet, $20 I had to borrow from my dad) and the guy said, “I’d pick a different one if I was you.”

From the get-go, we had a special bond. Like, he has his own Facebook page. And I dressed him in clothes. And he minded none of this. His favorite food is Goldfish (the crackers, not the fish) and his favorite place to sleep is in the hammock-nook my legs make every night, as I sleep with them in a number-4 configuration.

Every night ‘round bedtime, he’d get nuts and bite us. So we decided we needed another cat– should the day ever come that we had a baby, Phillip needed someone else to take his aggression out on. That’s when we got Eleanor, the scrappy street stray. There were rumors she’d had a litter already. She was basically tough and hated us, and that just made us want her more.

They got along great. We were one big happy family. And then, when we found out a new kitten was on the way, we had to move to a bigger place.

I was so worried. Phillip has a nervous bladder. And tush. Basically, if the litter temperature is not just right, he lets loose where ever. But they both handled the re-location like champs– in fact very obviously favoring our new environs to the old. Longer hallways to run down; higher window sills to jump up on.

But it was time to prepare for Baby, and that meant Phillip couldn’t sleep in the bed with us. They had their own room– yes, we moved to a place where our CATS WHO DON’T PAY RENT could have their OWN ROOM. I started practicing with them. I am so serious here. I would put them in the room, sit on the couch in said room, and read What to Expect When You’re Expecting until both cats fell asleep, and then I’d sneak out. They both learned to be ok. I still have not learned that skill. I tell myself this was preparing myself for motherhood, but let’s be honest. This is just crazy cat-lady stuff.

When Posey arrived six weeks early, all of our coming-home drills went out the window. Although I was now officially a Stay-At-Home Mom, I was gone every single day for three long weeks from 8 am to 8pm, spending my time at the NICU with the baby.

And that’s when the pooping started.

I’d come home to find it right by the front door, Phillip’s very special “Welcome home, F-You!” He knew something was different. And when Posey did come home, Beef and I both expected the worse. We were pretty sure he would bite her. We were already fighting about it basically while I was in labor. In my head, we were getting a divorce over the fact that he was making me choose between him and the cat. Because naturally, a mother chooses her baby. Also, I had protected the crib with one of these, so we were safe.

But then… they both just sniffed her. A perfunctory sniff, at best. No biggie. We’d brought home a few hospital blankets with her scent on them to try to prepare them, but who knows if that did anything. There was only one scary moment where I thought Po was a a goner, and it was this one right here:

The worst part of the whole experience turned out to be Phillip unlearning his “sleep in his own room” training, and I was yet to be experienced in the Cry It Out Method. When we’d get up every two or three hours to feed her, the cat would hear us up and think it was morning and time to come out– prompting him to scream like someone was chopping his tail off with a rusty butter knife. It was either get rid of the baby, or drug the cat.

Now I spend a few minutes every couple weeks cutting up regular, human Prozac into uneven, crumbly little morsels. Phillip’s a lot happier, but I think that’s mostly due to the fact that he’s been allowed back into the figure-4 formation in my bed. And while Eleanor still has yet to give Posey more than a couple glances, I can tell that Phillip is really trying. He comes around. He didn’t even mind the couple of time she’s grabbed his tail.

They do both love her stuff— Eleanor can usually be found relaxing either on the changing table or the Boppy Newborn Lounger, and Phillip enjoys riding shotgun in the undercarriage of our Bob Revolution. It’s like a sidecar:

So, if you are getting ready to bring home a baby and are worried about the cat(s) in your life not adjusting well, my three best pieces of advice (plus one moral guideline) are:

What are you planning on spending your millions on?

Posey and I are watching the kittens streaming live on HelloGiggles.com today.

You can watch them here.

I need to buy my baby a high chair.

I want to buy my cats a high chair. 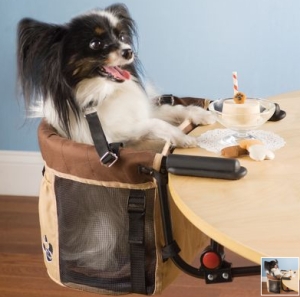 Anyone have a recommendation? For the baby kind. I’m leaning towards the Graco DuoDiner in Elefanta.

CAT STARS THAT GIVE UGGIE A RUN FOR HIS MONEY

Uggie may be the breakout star of The Artist, but some of us are just good ole fashioned cat people. If you lie awake at night wondering aren’t there any cat movie stars I can tip my chapeau to this Oscar season?  The answer is yes, there are!

This talented tabby made his debut as the title role in the 1951 film Rhubarb, but Orangey is is most famous for playing Audrey Hepburn’s cat– Cat–  in Breakfast at Tiffany’s. What’s that? Did he win any awards, you ask? Yes! He’s the only cat to ever win two Patsy Awards, which were the old-timey Oscars for animal actors, making him the Tom Hanks of tomcats.

Ted’s portrayal of Mr. Bigglesworth in Austin Powers earned this hairless Sphynx the second-most coveted title after People’s Sexiest Man Alive: Cats Magazine named him Cat of the Year in 1999. If only Ryan Gosling had whiskers– maybe he’d have a shot.

The Mary-Kate and Ashley Olsen of cat actors, these two Himalayans shared the part of Mr. Jinx in Meet the Parents opposite DE NIRO.  Misha performed his own toilet-flushing stunts.

Syn cuts his chops in 1963‘s The Incredible Journey, but it was his ballsy portrayal of “Darn Cat” in That Darn Cat that led The New York Times to declare this Seal Point Siamese the Clark Gable* of felines. (*That  equates to George Clooney in 2012’s celebrity market)

Today my baby is 19 weeks old.

At 19 weeks, I SHOULD be able to: delete the Kitty Halftime Show from my DVR no matter how many times I tell myself Posey really enjoys watching it. Especially the water dish cam shots.

I MIGHT be able: To prepare myself for the fact that I can’t protect her from everything and everyone– and nut allergies. Please God, skirt us around that tree nut thing.